Cliff notes: special forces in ww 2, betrayed by commanding officer took up denarian coin to get revenge. Worked for nicodemus as a denarian assassin until 20 years ago. found his family thanks to knights of the cross. Forsook the coin. Nicodemus killed his family by blowing up the church he and his family took refuge in. Survived and was visited by an angel whom gave him a new purpose. Rebuilt the church and by day is a priest. By night a warrior for god. The Eladrion.

Last Six Months- Father has actually calmed down a lot in the last six months. After going on a one month sabbatical in holy land, he has returned an almost different man. Hes spent most of his time at the church helping his parishoners. Even a young lady with her abusive husband.
Constance La dai, wife to Marco La dai. Underworld miscreant and leader of the demons head. A biker gang with a reputation for bad etiquette. Apparently Marco Had always been a bad man, but recently his appetites for violence and destruction had increased dramaticly.
Fearing her husband was now taking much stronger drugs she asked the father for help. Richard in turn called upon Kristopher. Kristopher asisisted (grudingly with the promise of much alcohol) in helping Richard track down Marco and his crew to their hide out. What they found was far more than they had expected.
Marco Had apparently gotten his hands on some scroll of summoning, and had made a pact with a demon named Shabbtoth. Shabbatoth had promised Marco and his men Increased power and long life in exchange for a vessel of his choosing. The vessel he chose… Micheal Kreig: Cts closest thing to a criminal kingpin. His unconcious form lay upon the alter about to have his wrist slit
Richard and Kristopher had a choice, Let a demon take over the body of one of the biggest crime lords in ct or possibly die in the attempt to save a criminal. So (with some coaxing from Richard) he and Kristopher came to the rescue. Kristopher retrieved Kriegs body, While Richard took on the Demons head members. As fast and strong as Richard was, he was very quickly over taken by the gang.
Shabbototh not to be denied, demanded Krieg put Richard on to the altar instead. When Kristopher returned he saw Richards form already splayed on the altar, wrists slit and the demon beginning to merge with Richards. However Just as it looked like the merging would be completed the demons spewed out of Richards form as if he had been physically flung like a ragdoll. Richards from Glowed on the altar so brightly that the bikers were taken aback. so distracted were they by this light the broke the summoning circle.
As the light died Kristopher grabbed Richard and helped him from the warehouse, as Shabbototh ripped and shred the bikers of the demons head. After dragging Richard to Safety, Kristopher went into the back of his car and pulled out a large brick of c4. After making a witty comment about preparedness. he flung the brick into the warehouse and detonated it. bring the warehouse down on top of the bickers and shabbototh .
When they returned to the church, Richard informed Constance of her Husbands passing, and was surprised to find her not upset at all. This was when Kristopher revealed what he’d known from the beggining. Constance la Dai was actually Constance Krieg. The abuse she had taken had been at the hands of Marco when she had tried to stop him from taking her husband. When Richard asked her why she had lied she asked, " Would you have helped me if you had known you were saving a crime lord? father"
Kristopher not to be outdone spoke with Krieg and advised him that not only did we save his life, but had saved his criminal empire. Kreig now accepted that he owed Richard and Kristopher.

That was three months ago. 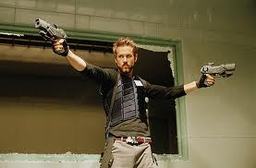